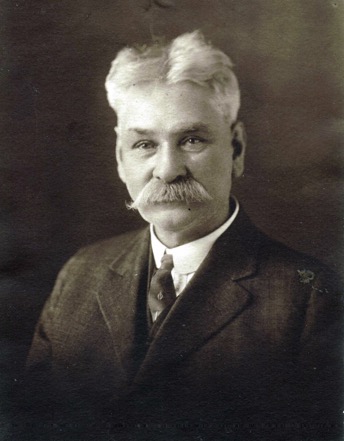 Newman Matthews was born on May 22, 1853, reportedly in Mackinaw, Illinois.  He is thought to have been raised in Mackinaw.  He entered the University of Illinois in Champaign on February 1, 1873, and left after three years without a degree.  He was listed on the university records as Newman Hamlin Mathews.

Newman met and married Anna Swanson in 1887, reportedly in Chicago.  She was born in Sweden on December 26, 1865, and her parents were Carl Magnus and Anna Sophia (Bentgson) Swanson.  Anna reportedly spoke seven or eight languages fluently, and was a good seamstress.

Herbert was born on August 7, 1889 in Sheffield, Indiana during a visit Anna (Swanson) Matthews, made to her parents, Carl and Anna Swanson.  Sheffield was a community on the Indiana side of 106th Street in Chicago.

Newman and his family were living at 10214 Ewing Avenue on the south side of Chicago.

They lived in Chicago until about 1898 when Newman moved the family to Clinton, Illinois and engaged in business there as a tinner.  In the 1899 Clinton City Directory he was listed as a plumber on West Washington Street.

In 1903, Herbert was taken out of school when he was 13.  His father wanted him to work and help support the family, but his father squandered the money on inventions.  Because of this, Herbert left home off and on.

In the 1904 Clinton City Directory, Newman was listed as a tinner living at the corner of West Clay and North Maple streets.  His brother, G. L. (George Leslie) Matthews was a grocer at 204 East main and resided at 308 East Adams with his wife Sarah, and Pearl.  Another brother, C. H. (Charles Holmes) Matthews was a weaver living at 403 East Main with wife Mary, and Charles.

In March 1904, while working on a tin roof, Newman fell 20 feet and was injured.

The same month, he sold his tin shop.

Newman returned to Chicago in 1904 and remained there until Anna’s death on March 27, 1907 of tuberculosis, abetted by heart disease.  Her death was probably hastened by the rigors of the birth of a child two months earlier, which died the next day.  She reportedly had a heart attack while washing clothes.  They were living at 1550 Wrightwood Avenue at the time.  Anna was buried without a marker in the common area of the Montrose Cemetery in northern Chicago.

Newman put the children in the Lutheran Home of the Friendless near Lincoln Park in Chicago.  The children hated it.  The food was terrible.  They were constantly fed a nasty tasting pudding which they refused to eat, and were receiving cruel punishment.  When Newman came to visit them in the fall of 1907, he saw that they had lice and other signs of poor care, and he took them out.  Betty was sent to stay with her grandparents, Carl and Anna Swanson, in Charlevoix, Michigan, and Iva and Nellie were taken in by two families.  Mabel said that after he took them out, he had various housekeepers.

Needing a wife for himself, and a mother for his children, Newman placed an advertisement in the Chicago Tribune of Oct. 12, 1907, page 4, with a large picture of himself, with pictures of his four children at the time, Nellie, Bernice, Iva, and Carl at each of the four corners of the ad. This was picked up and carried across national newspapers.

The newspaper put a small article in the paper about Newman’s plight:

N. H. Matthews, 1305 North Halstead Street, has a problem on his hands, and he has taken the ‘sign in the window’ method of solving it.  His wife died six months ago.  There are four young children at home.  He cannot get a competent housekeeper, so, in his extremity; he had decided to find a wife.  Three applicants ‘called yesterday,’ but the children, the moving cause of his appeal, frightened them away.

Newman moved the children to Indianapolis for a short time, then to St. Louis, Missouri where Mable took care of Iva, Nellie, and Betty.  Newman finally moved with the children back to Indianapolis, Indiana in the spring of 1908 and established a radiator repair shop at 142 W. 10th.

Daughter Betty remembers that Newman liked a lady named McComb, and would probably have married her, but she died.  Unsuccessful in attracting a wife, he put the children up for adoption.  In 1909, Ed and Otha Denton were looking for a girl to adopt.  They considered Betty, but as she said, “My sullen disposition turned them off,” and they selected Carl for his sunny disposition, and he lived with them until college age.

On September 18, 1913 Newman married Helen Kilby from Mackinaw, Illinois, believed to have been a childhood sweetheart.

Mackinaw last Thursday was thronged with visitors from all parts of the county and many parts of the state. Pekin had an especially large delegation, over 120 tickets being sold from that point. Many former residents of Mackinaw took advantage of this opportunity of visiting when they could meet all their old friends and the day was thoroughly enjoyed by all in a social way.

Dr. A. L. Koenecke of Pekin was the principal speaker of the day, his subject being the early history of our state and county with particular stress laid upon the facts pertaining to Mackinaw, showing up the history of our village in a very artistic way. Dr. Koenecke’s talk was both interesting and instructive and many people here hope to have the pleasure of meeting him again.

Gehrig’s Band of Pekin dispensed music throughout the day and evening as only Gerhig’s Band can and that with the P & O Quartet of Canton comprised the musical part of the program. Both were much appreciated. Sports and various amusements had their place and the picnic was a success in every way. Great credit is due to the management and committees for their untiring efforts in bringing this pleasure to us.

But the picnic was not the only important occurrence in Mackinaw on September 18, 1913. At one o’clock P.M. upon that day Miss Helen Kilby became the wife of Mr. Newman Matthews. Rev. Nat Sands of Manito, cousin of the bride, performing the ceremony in the presence of immediate relatives and a very few intimate friends. The bride is a daughter of the late Newman Kilby and has been well and favorably known in Mackinaw and vicinity all her life. Mr. Matthews was a former resident of Mackinaw and is well known here. After the ceremony they departed via the west bound Big Four train for Havana for a short visit at the home of Mrs. Matthew Bolan, a sister of the bride, and from there to Clinton where Mrs. Matthews formerly resided and from there to Champaign and Indianapolis, where they will reside, the groom being in business there.

They hoped to get away quietly and escape the usual shower of rice and old shoes, but the news leaked out, and they were followed to the train by a large delegation of friends who were lavish in their expression of good wishes.

Newman’s daughter Betty thought Helen was a wonderful mother, and loved her dearly, and thought the other children did also, except for Mabel, who seemed angry that Newman had remarried.  Betty had had a chronic cough, which irritated the other children who tired of constantly hearing it.  Helen treated it and cleared it up completely.

They lived in Indianapolis, where Newman had a business called “The Matthews Radiator & Lamp Repair Company.”

The story of Newman Matthews and Helen Kilby is continued in the Herbert and Goldie Matthews post.